Lies of the Climate Commission Part 11

We note ABC has once again breathlessly reported on the pronouncements of our Klimate Kommissar's latest report, this one is on NSW. 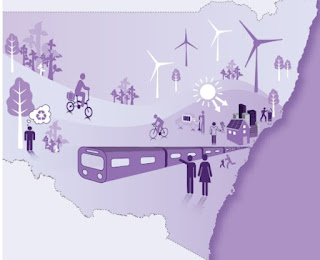 Cover of the Climate Commission's latest report showing the 10 people in NSW currently supported by the state's renewable energy output. Based on the image the report also predicts a bright future for western NSW with climate change bringing forests and mountains you can ride bikes down!  It also seems Hay will one day be linked to Sydney via the worlds largest corridor!

The report contains errors, is un-necessarily alarmist, heavily biased, contains distortions and misrepresentations, cherry picks data, fails to take historical extremes into account and relies significantly on the grey literature. Everything you would expect from a political document?

Here are some examples of the above:
Distortion Figure 2-only shows the high end of projections, why not show the full range of model outputs?
Cherry Picking: Box 2 Heat records continue to be set! The highest temperature in 2009 was 46.8 in Menindee in western NSW (site of future forests). The commission fail to state that the state's highest temperature remains 49.7 degrees in Menindee on January 10, 1939. Menindee also holds the 4th highest temperature, 48.6 degrees on 11 January 1939. The top 5 all occur prior 1973. Box 2 also describes the dreaded Nov 2009 heatwave that saw the monthly maximum temperature in Bathurst 7.8 degrees above the average. Odd that the climate commission did not mention the January 1960 heatwave (see HERE for previous discussions). This saw the average monthly temperature in Hillston for January 1960 8.1 degrees above the long term average!
Misrepresentation: Figure 6 is purported to be a bushfire in the Morton National Park. The photo is sourced from Flickr. A quick check shows the photo was taken on March 29, 2009. Note the climate commission have conveniently trimmed the photo to exclude the unburnt area across the road. It seems this photo is of a controlled burn! This was undertaken in the area by NPWS in March 2009. Why does the Climate commission show a man made fire? Bushfires did occur in Morton National Park in January of 2009, why not show a picture from that actual bushfire?
Historical extremes: Box 4 - Single storm event causes major disruption in Sydney. The Climate commission decides on 8 March 2012. Seems more severe damage done many times over by single storms in the past. Here are a few historical reports from an era when atmospheric CO2 was lower. Swamped with numerous reported storm events we just looked at a few reports in the Sydney Morning Herald between January and March 1936:
TERRIFIC STORMS. Lightning Strikes Camp. TWO MEN KILLED. Fireball Creates Havoc at Liverpool. HOUSEROOFS CARRIED AWAY.11 January 1936
STORM. WIDESPREAD AREA. Rain and Wind Havoc AFTER HOTTEST DAY. 17 January 1936
HEAT WAVE Sweeps the State. COOL CHANGE LIKELY TO-DAY.29 January 1936
THUNDERSTORM. BREAKS OVER SYDNEY. HAIL AND DRENCHING RAIN. 10 February 1936
SYDNEY STORM 11 February 1936
RAINSTORMS OVER SYDNEY. Heavy Damage. 9 March 1936
FLOODS In South Areas. BOATS IN STREETS. Blockages on Rail and Road. 16 March 1936
More cherry picking Box 5 Hunter region storms 2007. The commission reports that the 2007 storms in the Hunter Region caused 10 deaths and 6000 evacuations. Rainfall over Maitland in June that year 392.3mm (BOM Station 61388). Seems much worse has affected the Hunter when CO2 levels were lower... June 1950 554.2 mm (BOM Station 61034-about 2 km from 61388). This provided headlines such as these:
Flood Losses Estimated At Millions 28 June 1950
9,000 NOW HOMELESS IN FLOODS GREAT AREAS SUBMERGED Losses Of Stock "Enormous" 26 June 1950
"Colossal" Damage To N.S.W. Roads By Floods, Experts Say 23 June 1950
HEAVY COAL LOSS THREATENED; CESSNOCK CUT OFF 22 June 1950
MORE FLOOD REFUGEES Maitland Still Tense 21 June 1950
400 MORE FLOOD REFUGEES Warning At Maitland 20 June 1950
RACE IN FLOODS WITH DYING BABY 19 June 1950

The Climate Commission once again caught playing politics with the truth.

Update Warwick Hughes has more on the Commission's misrepresentation of the Sydney regional temperature data HERE. Extract below.

To sum up how the Climate Commission has been misleading.[1] Shortening the Sydney trend to censor out periods warmer than they want you to know about.[2] Failing to find the well known Richmond RAAF data – which comprehensively ruins their storyline.[3] Leaving a large gap in their Paramatta trend circa 1978 which they should have known was concealing a peak comparable to the last few years. Keeping their storyline intact again.[4] Making all manner of scaremongering statements about heatwaves based on 1,2 & 3..
Posted by Marc Hendrickx at 10:51 PM