Updated from last night.
Update: The Australian comments HERE
On tonight's Mediawatch program Jonathan Holmes seemed to suggest the Canberra Times did not report that ANU scientists were subject to death threats. From the transcript Holmes smugly states "But hang on, The Canberra Times article did not report that death threats had been made to academics at the ANU." As a result it suggested that The Australian's recent article on the issue was wrong. That CT article did not specifically mention death threats but these articles from the Canberra Times (Below) from last year did. And based on these, and the absence of any police investigation, the ANU claims are indeed debunked. 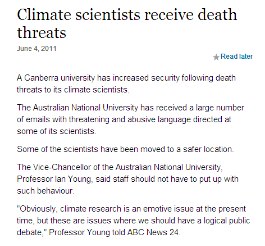 Article HERE
or how about this ONE... 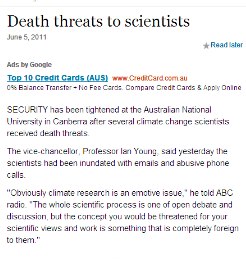 Seems the Canberra Times article that Media Watch featured is no longer online...
UPDATE Media Watch have a PDF HERE
Page Not Found.
We could not find the page you requested.

The reporting on this issue by all parties is somewhat confused, some of the confusion caused by those involved. As to the other "death threats", we await the outcome of police investigations (Ed Are there any?).
Posted by Marc Hendrickx at 10:03 PM