Freeman Dyson passed away last week (28 Feb). One of the world's greatest thinkers in physics. He was outspoken on many issues. On climate change he was completely unconvinced it was a major problem. He wrote recently:

To any unprejudiced person reading this account, the facts should be obvious: that the non-climatic effects of carbon dioxide as a sustainer of wildlife and crop plants are enormously beneficial, that the possibly harmful climatic effects of carbon dioxide have been greatly exaggerated, and that the benefits clearly outweigh the possible damage.
I consider myself an unprejudiced person and to me these facts are obvious. But the same facts are not obvious to the majority of scientists and politicians who consider carbon dioxide to be evil and dangerous. The people who are supposed to be experts and who claim to understand the science are precisely the people who are blind to the evidence.

ABC failed to report his passing. The taint of the ideological spin coming from Ultimo so great that the passing of one of our best and brightest goes unnoticed because of his scientific scepticism. Utterly shameful!

RIP FREEMAN DYSON, your equations and words live on. 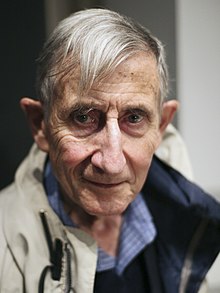 Posted by Marc Hendrickx at 7:33 AM