Climate spin at The Con

ABC's academic arm The Con. have an article by Communications and Media Studies lecturer David Holmes titled: Climate change and the politics of consensus. The article is accompanied by a picture showing what appears to be a group scientists in white coats (see below). Now who could argue with that authority? 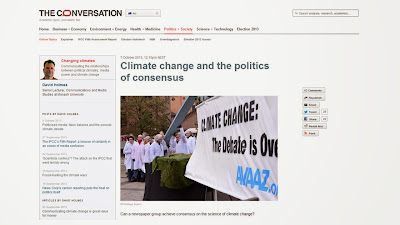 A close look at the photo shows the banner was provided by AVAAZ an online activist group. A quick web search reveals a Yahoo news story where we find the "scientists" are actually AVAAZ protesters! 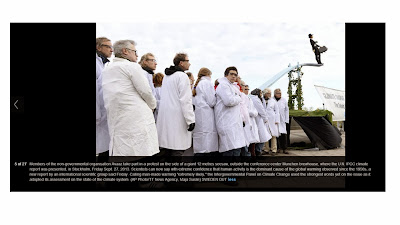 The caption reads: Members of the non-governmental organisation AVAAZ take part in a protest on the side of a giant 12m seesaw, outside the conference centre Munchen brewhouse where the U.N. IPCC climate report was presented.
http://news.yahoo.com/climate-panel-warming-extremely-likely-man-made-081442244--finance.html
Use of activist propaganda imagery by a tax payer funded site does little for the credibility of The Con, or the author. We made a note and asked some difficult questions. The image preserved at Webcite.
Posted by Marc Hendrickx at 12:22 PM

Email ThisBlogThis!Share to TwitterShare to FacebookShare to Pinterest
Labels: propaganda, the conversation