Some screen shots below showing the effect of the cull of reports from ABC's News Archive:
The Wayback Machine, the Internet archive, has preserved some glimpses of ABC's Archive for posterity. We looked at June 16, 2008 when ABC News posted a record 392 reports. The Wayback machine archive captured on 2 February 2011 confirms our earlier count, showing 15 pages with 25 reports each, with the 16th page containing 17 reports. As of this morning the ABC's achive shows just 10 pages, each with 25 reports for a total of 250 reports, meaning access to 142 reports through the archive have been removed, effectively culled (see comparison of screen shots below-click to enlarge). It seems that reports prior to about midday, in this case, have been sent down the memory hole. 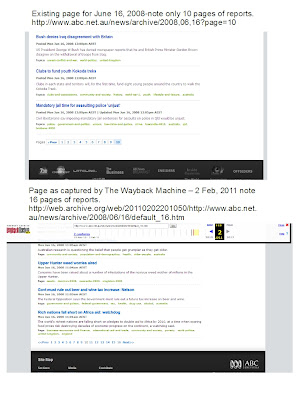 The missing stories such as this one (Skiers take advantage of alpine snow) still appear to be available if you know the URL.
Why the ABC have placed a limit on the number of stories in its archive remains a mystery. It seems at this point that attempts to thwart our productivity survey at least one possible reason, incompetence always another.

Posted by Marc Hendrickx at 7:08 AM