peer review alive and well despite the best efforts of a few.

ABC News have yet to provide any coverage of the resignation of the editor in chief from the journal Remote Sensing, they did however publish my take on the issue at The Drum. You'll need to read to the end in order to appreciate the meaning of title that reads  "Peer review is dead, long live blog review". Part of the argument can be summed up by the comics below. 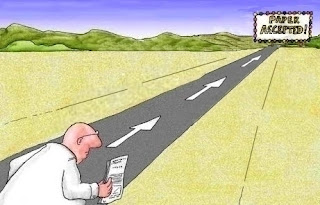 IPCC ROUTE THROUGH PEER REVIEW (ABOVE)


SCEPTICS ROUTE THROUGH PEER REVIEW (BELOW) 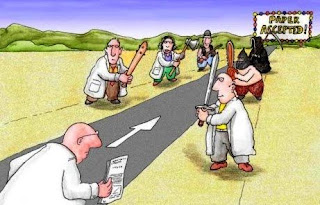 apologies to original artist "NICK"
Here's the opening salvo of the article...
In January 2009, Nature splashed its front cover with the results of a new study titled 'Warming of the Antarctic ice-sheet surface since the 1957 International Geophysical Year'.
The article was accompanied by a glowing editorial from Nature and was widely reported on in the media.
A very short time after the paper was published, a number of factual errors were found in the paper, along with significant issues with the methodology used to obtain the surprising results. The errors and the methodological problems were reported and discussed by climate change blogs Watts Up With That, The Air Vent, Climate Audit and Real Climate.
Imagine if at this stage Nature's editor in chief looked at the reported blog commentary and decided the journal had published a paper, which while it had gone through the normal peer review processes, based on some of the blog commentary, was basically fundamentally flawed and should not have been published.
Furthermore, the original reviewers may have shared some of the climate alarm notions of the authors, bringing the veracity of the original review into question. Media coverage alsosensationalised aspects of the results. The editor in chief is so embarrassed by the publication of the erroneous paper, he decides to resign.
Update 22/9 Jeff at The Air Vent has some great graphics that contrast Steig et al 2009 Antarctic temps with the corrected temps of  O'Donnell et al 2010, quite startling! See HERE