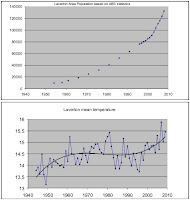 Top: population growth around Laverton based on ABS statistics.
Bottom: Laverton Mean temperature based on BOM records
Note sharp rise in both after 2000
(click to enlarge)
We raised the issue of the Urban Heat Island effect at Laverton in a letter to the Hon. Peter Garrett Minister for Environmental Protection, Heritage and the Arts, following ABC's belated discovery of UHI. Part of Hon. P Garrett's brief is looking after Australia's Bureau of Meteorology (BOM). The content of the letter can be viewed at the Watts Up With That post titled "More weather BoM’s in Oz". The temperature data at Laverton was also discussed in this Watts Up With That post "Before one has data". Today we received a response from the Minister written on his behalf by Dr Greg Ayers Director of the Bureau of Meteorology.

The letter is shown below. Click on the image for a larger version. 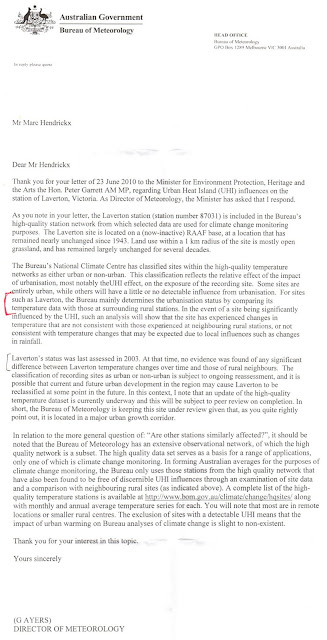 BOM indicates it last looked at Laverton in 2003. Based on the graphs above we suggest BOM should complete its review of Laverton as a matter of urgency. In the meantime we have requested BOM supply the names of surrounding rural stations used in its comparison so that an independent audit of UHI at Laverton can be undertaken. As BOM appears to have closed most of its rural stations surrounding Laverton and as many of the remaining stations have their own data quality problems (see below) we are left to wonder which sites BOM have left to compare Laverton with?
The published literature appears to disagree with BOM's letter. Torok et al demonstrate:
1. Based on the relationship between UHI and population in this paper UHI at Laverton can be estimated at about 5.18 degrees over rural temperatures.
2. Torok  et al state "It is possible that the measured Melbourne UHI is a slight underestimate, as measurements across the urban-rural boundary were not continued far into the rural area."

As stated it clear the hard yards have not been done in measuring UHI at this site. BOM may want to look at its method of measuring UHI given the rapid growth around Laverton. 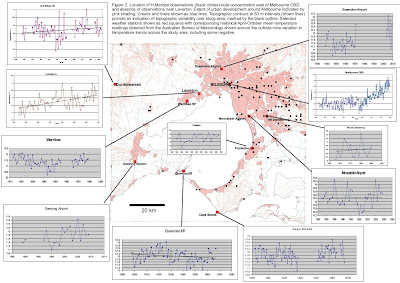 More on this as it arises.
By the way Ken Stewart has recently completed an audit of BOM's High Quality Temperature Site Network, finding that:
See Ken's post  The Australian Temperature Record- Part 8: The Big Picture
Posted by Marc Hendrickx at 12:05 AM