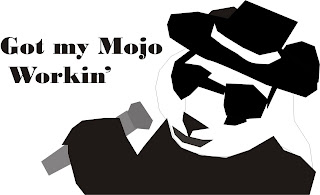 Got my mojo working,
but it just don't work on you
Muddy Waters "Got my mojo working"
UPDATED BELOW
ABC News posted a brief report titled "WWF say marginals back carbon trading" on a recent poll commissioned by the World Wildlife Fund on community attitudes on an ETS. According to the ABC the poll found: "74 per cent of respondents in the seats of Brisbane, Bowman, Petrie and Ryan say they are in favour of an ETS to reduce carbon pollution."
However given the WWF are strong supporters of an ETS, you'd think the ABC would take the time to check on how the survey was conducted, just in case the WWF used its "Mojo" to get the result it desired.
Rather than wait for the ABC to ask the hard questions this time we put them to the WWF directly.
Unlike the ABC they provided a prompt, polite response (They sure got that Mojo workin'):

All well and good, except that the question makes the mistake of equating carbon - the element, with carbon dioxide the gas. It then loads the question with the inference that carbon equals "pollution". Now who is in favour of "pollution"?
We wonder what the response would be if the following question was included:
Recent peer reviewed scientific evidence indicates that the climate's sensitivity to carbon dioxide has been exaggerated and future warming due to higher levels of atmospheric Carbon Dioxide will probably be much less than 2 degrees, with global temperatures predicted to be similar to historical natural warm periods such as the Minoan, Roman and Medieval Warm Periods. It has also been demonstrated that higher levels of atmospheric carbon dioxide is beneficial to the Earth's biosphere. Considering these statements: Are you in favour of an emissions trading scheme? Would you support an increase in Carbon Dioxide emissions?


Don't let those survey result go to work on you!


Thank you for your email of 22 July concerning the ABC News Online story “WWF says marginals back carbon trading” published the previous day.
In line with ABC complaint handling procedures, your concerns have been considered by Audience and Consumer Affairs, a unit separate to and independent from ABC program areas. In light of your concerns, we have assessed the story against the ABC’s editorial requirements for accuracy and polls, surveys and statistics, as outlined in sections 5.2.2(c) and 5.6.3 of the ABC’s Editorial Policies:http://www.abc.net.au/corp/pubs/edpols.htm.
The story in question was a brief reported that the World Wildlife Fund (WWF) claimed a majority of voters in four marginal seats in Queensland were in favour of an emissions trading scheme (ETS). The basis for the claim was a new Galaxy poll, commissioned by the WWF.
On review, Audience and Consumer Affairs believe the report made clear that the survey was commissioned by the WWF; an organisation the audience would be aware is in favour of conservation and action to address climate change. We do not believe further details of the organisation’s stance on the issue was required, or that the report need have included details or an analysis of the survey methodology, as you suggest. Instead, we consider the story included sufficient context for the audience to judge the survey and its findings.
As noted in the report, the survey was conducted by recognised market research company, Galaxy Research. We believe the poll, as one measure of community sentiment on an issue of ongoing debate and of relevance to the federal election, had genuine news value and significance beyond the interests of the organisation that commissioned the survey. It is important to note that the story reported on the findings of the poll, and the views of the WWF, and does not represent the editorial opinion of the ABC.
Accordingly, while noting your concerns, Audience and Consumer Affairs are satisfied the story was in keeping with sections 5.2.2(c) and 5.6.3 of the ABC’s Editorial Policies. Nonetheless, please be assured that your comments have been brought to the attention of ABC News management.
Thank you again for taking the time to write, and for your interest in the ABC. For your reference, a copy of the ABC Code of Practice is available at: http://www.abc.net.au/corp/pubs/documents/200806_codeofpractice-revised_2008.pdf.
Yours sincerely
Audience & Consumer Affairs
Posted by Marc Hendrickx at 12:05 AM