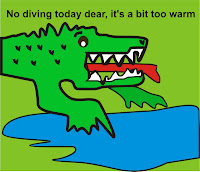 ABC REPORTED: ABC have covered another poorly thought through, yet (surprisingly) published study, titled "Diving through the thermal window: implications for a warming world". This study looked at the potential effects of a warmer climate on the animal world, this time the focus is on the Australian Freshwater crocodile (Crocodylus johnstoni). The study compared seasonal changes (yes summer versus winter, or rather wet versus dry) in the dive time of crocodiles and used the results to conclude that  "the findings suggest that crocodiles could be adversely affected if predicted warming of several degrees occurs." Remarkably these unsupported conclusions based on seasonal changes are extended to encompass "other air-breathing ectotherms like turtles, snakes, lizards and amphibians."

THE COMPLAINT: There is a problem with the first line of the abstract of the study that the ABC did not think to question. The first line reads:
"Population decline and a shift in the geographical distribution of some ectothermic animals have been attributed to climatic warming." In a study that focuses on Australia Freshwater Crocodiles ABC did not think to check its own archives for a pertinent question. According to an ABC report published in 2008 titled "Crocodiles falling victim to cane toads", it seems the humble yet deadly cane toad has had a greater adverse effect on Fresh water crocodiles that variations between Summer ....and ...er.....Winter. Prior to this numbers of freshwater crocs were on the increase following a cessation of hunting in the late 1960s. The animal is not listed as being under threat.
Crocodylus johnstoni has thrived despite massive changes in temperatures for 100s of 1000 years. It has survived at  least 4 ice ages over the past million years and the associated major swings in temperature and precipitation and changes in prey species. It has survived warmer and colder conditions. Its biggest enemy at present is the cane toad, yet ABC help promote "Summer" as its major threat.
Update: Here's some useful information on Crocodylus johnstoni:
http://www.flmnh.ufl.edu/cnhc/csp_cjoh.htm
DIET: The "longirostrine" (long and slender) shape of the snout, like that of the gharial, suggests a primary adaptation to a piscivorous (fish-based) diet, and fish are certainly handled with ease. However, a wide variety of other prey items are often taken - generally invertebrates and small vertebrates, especially when younger. Larger individuals may take terrestrial species. C. johnstoni favours a sit-and-wait hunting strategy, snatching prey up with a lightning-fast sideways movement of the head. It rarely feeds during the dry season because of a lack of prey availability, low temperatures at night and a reduction in available habitat due to drying of pools and rivers.


OUTCOME: ABC reply August 20/2010
Thank you for your email regarding the ABC Science article 'Crocodiles dive less in warmer waters', published on 7 July. I am sorry for the delay in responding to you.
I understand you believe the staff responsible for this article were not questioning enough. In light of your concerns, Audience & Consumer Affairs has assessed the article against section 5.2.2(f) of the ABC's Editorial Policies (http://abc.net.au/corp/pubs/edpols.htm), which states as follows: "Be questioning. Serve the public interest by investigating issues affecting society and individuals".
The article reported the results of the study 'Diving through the thermal window: implications for a warming world', published in the journal Proceedings of the Royal Society B. ABC Innovation has advised that the focus of the article was on the study's finding that crocodiles do not dive for as long in warmer water. The researchers used this finding to say that if global temperatures increase, this would have an impact on crocodile diving behaviour.
I note your view that the authors of the study should have been questioned about the opening line of its abstract. The line to which you refer was a summary of the following statement in the study: "...recently, numerous cases have been reported of population decline and a shift in the geographical distribution of some ectotherms as a direct result of climatic warming events". The study cites six different studies in support of this statement. Given how strongly the statement is supported in the scientific literature, Audience & Consumer Affairs considers that it is not so patently dubious that it demands questioning, as you appear to suggest.
Audience & Consumer Affairs considers that research on the possible impacts of global warming is an issue affecting society and individuals, and ABC Innovation's decision to report on the study and interview a member of the research team, Dr Matthew Gordos, was consistent with section 5.2.2(f) of the Editorial Policies. On the basis of the content of the study and the article, it is clear that the staff responsible for the article asked pertinent questions of Dr Gordos. On review, Audience & Consumer Affairs is satisfied that the requirements of section 5.2.2(f) of the Editorial Policies were met.
Nonetheless, please be assured that your comments have been noted and conveyed to relevant staff in ABC Innovation. The text formatting error to which you refer has been corrected.
Thank you for taking the time to write.
Yours sincerely
ABC Audience & Consumer Affairs
COMMENT: ABC Science: running with the bulls
Posted by Marc Hendrickx at 12:05 AM

Email ThisBlogThis!Share to TwitterShare to FacebookShare to Pinterest
Labels: crocodile