Chinese study: Global cooling can lead to unrest and warfare 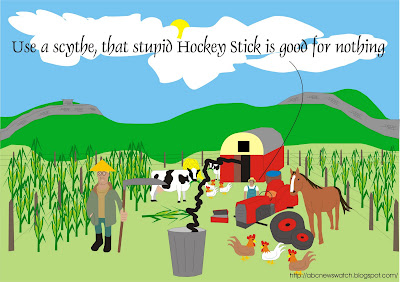 ABC provide coverage on a new study titled "Periodic climate cooling enhanced natural disasters and wars in China during AD 10–1900" published in the (Proceedings of the Royal Society B) that links cultural change with climate change in China. ABC report:
Zhang and colleagues speculate that periodic temperature shifts roughly every 160 or 320 years were related to natural climate changes, namely fluctuations in solar activity and in Earth's orbit and axial spin. The team say the findings demonstrate that climate change can lead to unrest and warfare. But the historical evidence they found points to global cooling, not to global warming, as the culprit.
Yet another story that indicates there's nothing unprecedented in the recent weather, and a sign perhaps that cracks are emerging ABC's Groupthink culture.
Here's the abstract (note that Proc. Royal Soc B is free for July so download a copy of the study):
Recent studies have linked climatic and social instabilities in ancient China; the underlying causal mechanisms have, however, often not been quantitatively assessed. Here, using historical records and palaeoclimatic reconstructions during AD 10–1900, we demonstrate that war frequency, price of rice, locust plague, drought frequency, flood frequency and temperature in China show two predominant periodic bands around 160 and 320 years where they interact significantly with each other. Temperature cooling shows direct positive association with the frequency of external aggression war to the Chinese dynasties mostly from the northern pastoral nomadic societies, and indirect positive association with the frequency of internal war within the Chinese dynasties through drought and locust plagues. The collapses of the agricultural dynasties of the Han, Tang, Song and Ming are more closely associated with low temperature. Our study suggests that food production during the last two millennia has been more unstable during cooler periods, resulting in more social conflicts owing to rebellions within the dynasties or/and southward aggressions from northern pastoral nomadic societies in ancient China.
Posted by Marc Hendrickx at 10:34 PM