ABC's ineffectual reporters once again fail to ask any questions in regurgitating a BOM report on a hot July in the top end.
ABC's report identified the following key points:

Let's look at these one by one.
1. Some places saw temperatures between 3C and 4.5C above long-term average
ABC failed to question the BOM about the how the long term averages are currently determined. The changes quoted by BOM are based on the ACORN data. This is a manufactured dataset based on an undisclosed homogenisation algorithm with arbitrary adjustments (see below). For the NT it is derived from a handful of stations. The NT covers 1.421 million km²; over such a large area how useful is an average based on just a handful of homogenised stations?

2. In Darwin the overnight low only dropped below 20C six times
So what! Based on the actual measurements from the Old Darwin Post Office (14016) and Airport (14015) this is not out of the ordinary and has been surpassed on quite a few occasions. It might have been worth the BOM pointing out that in 1915 NO (yes zero) nights dropped below 20C, and that there have been warmer overnight averages in Darwin the past (see tables below). ABC's reporter may have asked on how many occasions this had occurred previously and what was the record?

3. BOM says "hard to say if this is new normal"
As usual ABC (and BOM) omit any context or history in claims involving climate change. The graphs below show actual mean maximum and minimum temperatures for Darwin Post Office (BOM 14016) and Darwin Airport (14015) for July from the start of records in 1869. For the Post Office observations were collected in a Stevenson Screen from at least 1890. For the Darwin area this shows a cyclic pattern of temperature variation in both Min and Max means. Interestingly, based on the un-adjusted data there is little change in the long term means. Mean temperatures provide little information about weather experienced on a day by day basis. As usual ABC (and BOM's) reporting is superficial, omits key information and fails to inform. 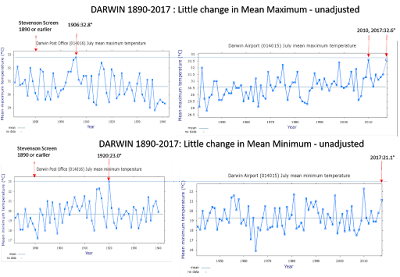 Addendum
As an indication of the arbitrary nature of BOM's homogenisation process the list below shows recorded and ACORN minimum temperatures, and the difference for Darwin Post Office (14016) for July 1915. The range of adjustments over the period lack any credibility.

Posted by Marc Hendrickx at 8:16 AM