Awaye with the truth

The program 'We don't dream': a tribute to Kunmanara Lester opens with the following introduction:

"When the British tested a nuclear weapon, the first on the Australian Mainland at Emu Field in 1953 it permanently blinded a Yankunytjatjara boy living down wind with his family at Wallatinna. That 12 year old boy, Kunmanara Lester, went on to become a visionary and a cultural leader like few others. In the 1980s he agitated strongly for a Royal Commission into the British nuclear tests at Emu and Maralinga."

It is clear from Royal Commission testimony that Kunmanara Lester believes his blindness was due to radioactive fall out from the so called "Black Mist" that passed over Wallatinna after the Totem 1 test at Emu Field. There is also no doubt about his important contribution to recent Australian history. However the Royal Commission agitated for by Lester paints a more complex picture about the likely cause of his blindness that would have been worth ABC's attention. The most likely cause according to the doctor who treated him in the 1960s being trachoma exacerbated by poor nutrition and measles rather than solely from exposure to fall out from the nuclear tests. This would have been useful information for ABC listeners, as the incidence of trachoma remains unacceptably high among aboriginal communities to this day, its cause is related to poor hygiene in remote communities. According to the Fred Hollows Organisation  Australia is the only developed country in the world where trachoma is endemic. 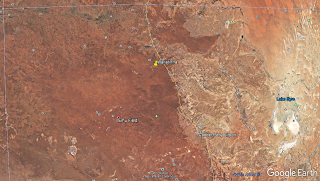 The McClelland Royal Commission spent some time examining the fall out at Wallatinna and the cause of Lester's Blindness (see p174-194).  It determined that fall out likely did affect the Wallatina area, 173km from the test site, but found that likely levels of exposure were very low (ref P.187).

The commission reports the following medical evidence in relation to Lester's Blindness (P.191):
6.4.79 Dr David Tonkin first saw Lester on 6 August 1965, [RC 552, p. 2].
In 1983, based on his own examinations of Lester, and other records which were available, Tonkin concluded that Lester had:
1. a long history of red, sore eyes since childhood (there is evidence of trachoma scarring inside the lids)
2. blindness since the age of 14 years, following ulcers during a severe attack of measles (presumably when the sight in the right eye was lost)
3. loss of the left eye in 1957, the eye having been blind for nine years previously.
'The findings in the right eye, both before and during surgery, indicate a long-standing history of infection (trachoma), with dense (total) corneal scarring, iris adhesions, and cataract changes following a severe corneal ulceration which had perforated.  Although severe, such ocular manifestations are recognised complications of trachoma, and in this instance they were possibly accentuated by measles. I [RC 552, p.2]

Oddly Point 3 suggest that Lester was blind in his left eye 5 years prior to the tests. Which seems to contradict Lester's own evidence:

6.4.76 Yami Lester, who was at Wallatinna when the Black Mist incident occurred, and who was aged about 12 at the time, attributes his blindness to the incident. Describing the mist, and how it made people ill, he said
'When people first got sick my eyes got sore. I couldn't open my eyes. I got diarrhoea and a rash on my skin. I remember when this happened my mother asked me to stay in the shade. Because I couldn't see I was led around with a stick like a digging stick. You hold it at one end and the person walking ahead of you holds the other end and you follow along. I didn't have the stick for long, I don't reckon it was even a week. My left eye sort of came good again so I threw away the stick but my right eye was permanently blind after that. I could see with my left eye but it gave me a lot of trouble. I could not see 100% wi th my left eye.' [AB 11, pp.6-7]
6.4.77 Lester went on to say that he lost the sight of his left eye in 1957 [AB 11, p.8].

The commission also looked at the potential interacting effects of trachoma and measles with low-level doses of radiation but could make no firm findings based on lack of evidence or relevant studies.

In the end the commission made the following conclusions: in regard to fall out at Wallatinna and Lester's blindness:

Conclusions
6.4.92 (a) The differences in the details of Aboriginal accounts of the Black Mist are to be expected after the passage of over thirty years. The accounts are sufficiently consistent in general for them to have credibility.
(b) An oral history of the Black Mist existed for many years before the incident became known to the general public.
(c) Meteorological, mathematical and statistical modelling indicates that a black mist passing over Wallatinna and Welbourn Hil1 could have happened.
(d) There is no reason to disbelieve Aboriginal accounts that the Black Mist occurred and that it made some people sick. Both radiation exposure and fear can lead to vomiting. At Wallatinna, the vomiting by Aborigines may have resulted from radiation. It may have been a psychogenic reaction to a frightening experience, or it may have resulted from both of these.
(e) The Royal Commission believes that Aboriginal people experienced radioactive fallout from Totem 1 in the form of a black mist or cloud at and near Wallatinna. This may have made some people temporarily ill. The Royal Commission does not have sufficient evidence to say whether or not it caused other illnesses or injuries.
(f) Given the historical uncertainties and the current state of scientific knowledge, the evidence presented does not enable the Royal Commission to decide one way or the other whether the Black Mist caused or contributed to the blindness of Yami Lester.

From the Conclusions and recommendations report:
99. Given the historical uncertainties and the current state of scientific knowledge, the evidence presented does not enable the Royal Commission to decide one way or the other whether the Black Mist caused or contributed to the blindness of Yami Lester. (6.4.92-)

It seems the truth is a little more complicated than the picture painted by the ABC.

Reply from ABC complaints 24/8/2017. Seems they are willing to ditch the truth.


Thank you for your email regarding RN’s AWAYE! ‘We don’t dream’: a tribute to Kunmanara Lester.

In accordance with the ABC's complaints handling procedures, your correspondence has been referred to Audience and Consumer Affairs, a unit separate to and independent of the content making areas of the ABC. Our role is to review and, where appropriate, investigate complaints alleging that ABC content has breached the ABC's editorial standards. The ABC's editorial standards can be found here: http://about.abc.net.au/reports-publications/code-of-practice/.

Audience and Consumer Affairs have reviewed the piece and assessed the contents against the ABC’s editorial standards for accuracy which states, relevantly, in part 2.2: Do not present factual content in a way that will materially mislead the audience. In some cases, this may require appropriate labels or other explanatory information.

The segment was designed to be an obituary for Mr Lester and not a news article considering the possible causes of his blindness or, as you have suggested, an investigation about eye health in Aboriginal communities.

The ABC has covered many aspects of Emu Fields and Maralinga over the years including extensive coverage of the McClelland Royal Commission.

We would further note, that while the report does quote Dr David Tonkin stating, based on his examination of Mr Lester, that he believed that trachoma and measles played a part in Mr Lester losing his eyesight, the report also stated that Dr Tonkin “has no expert knowledge of radiation. Tonkin’s views on Lester’s blindness assumed a direct radiation injury. He [Tonkin] did not profess to have made a study of the potential interacting or synergistic factors to which Pochin later addressed himself.”

Throughout his life, and as noted in the AWAYE! piece, Mr Lester maintained that the Black Mist was responsible for his blindness. And his experience with the Black Mist and the nuclear test formed a basis for his life-long activism.

Nevertheless, your comments have been noted by our unit and ABC Radio.

Should you be dissatisfied with this response, you may be able to pursue your complaint with the Australian Communications and Media Authority (www.acma.gov.au).

Thank you for contacting the ABC.

Posted by Marc Hendrickx at 8:44 AM