Yesterday ABC's complaints division finally got around to publishing an upheld complaint made way back in May (wow, now that's a quick response!). The details are below:

The World , 16th May 2017
Summary published: 14th August 2017
Complaint:
A viewer complained that an interview with Max Bergmann from the Centre for American Progress was a “one-sided criticism of Donald Trump” and that the presenter failed to disclose the political affiliations of the Centre for American Progress.
Complaint Finding Status: Upheld
Upheld against 2.2 ABC Editorial Policies (11 April 2011)

Audience and Consumer Affairs response:
The ABC agreed that more information should have been provided about the Centre for American Progress. This information was relevant and important to the audience and its absence meant that viewers were not able to weigh Mr Bergmann’s observations and criticisms in their proper context. Accordingly, the broadcast was not in keeping with the ABC’s editorial requirement not to present factual content in a way that will materially mislead the audience. The complainant’s other concerns were not upheld.
Complaint finalised July 2017.

Now you'd think this may result in some ABC wide advice along the lines of:

"When interviewing representatives from the Centre for American Progress don't forget to mention their political affiliations to provide listeners with the proper context in order to weigh the opinions and observations offered."

It seems Geraldine Doogue missed the memo, for last weekend she interviewed Max Bergmann from the Centre for American Progress, and once again listeners were given scant information about Mr Bergmann's background that would enable them to place his observations in their proper context. 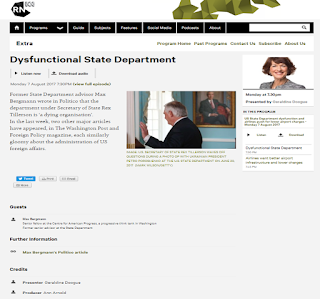 ABC: the place where no one learns from history, and everybody ignores the complaints department.

At the end of the interview, Ms Doogue referred to Mr Bergmann as “until this year, a senior advisor at the State Department under John Kerry, now a senior fellow at the Centre for American Progress, a think tank in Washington”.

In response to this complaint, Saturday Extra has updated his title on its website to specify that his time as senior advisor at the State Department was under Barack Obama's Presidency. http://www.abc.net.au/radionational/programs/saturdayextra/dysfunctional-state-department/8775560

Ms Doogue also will make reference on air on Saturday August 26 to the Centre’s links to the Democratic Party.

Posted by Marc Hendrickx at 4:38 PM