Lies of the Climate Commission: Part 2

ABC News were very quick to uncritically report on the release of the government's Climate Commission report titled  "The Critical Decade".One of the authors of the report, Climate Kommisar, Will Steffan has been shown to have problems conveying accurate information about climate science to the public (see Part 1 of this series).  As such we would expect ABC to be somewhat sceptical about claims made in the report. As an example take this statement on page 6 of the report dealing with recent temperature rises: "Figure 1 shows the global average temperature record from the late 19th century to the present. Over the last three decades, the rate of warming has been 0.17 °C per decade, a very high rate from a geological perspective." 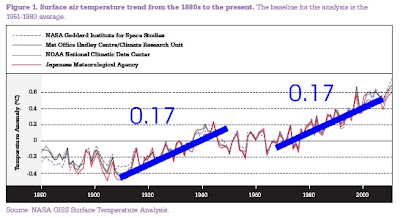 We added trend lines to the commission's graph to show the rate of temperature increase from 1970 through to the early 2000s is the same as that between 1910 and 1940. That is about 0.17 degrees C per decade. It seems that the rate of recent warming is not unprecedented even in the last 100 years. Speaking about the last 100 years as the climate commission itself notes:  "However, time series of at least three decades – and preferably much longer – are required to differentiate with confidence a long-term climatic trend from shorter term variability." So why with a 100 years of good data does the commission focus on the trend for the last 30 years? Just one climate cycle. Here's Figure 1 again with the trend for the last 100 years superimposed-this is about 3 climate cycles. The rate of warming, based on all the data shown, and not just a cherry picked portion, now is 0.07 degrees per decade. If this rate continues the average global temperature in 2100 will be around 1.4 degrees higher. Well below the 2 degree buffer. 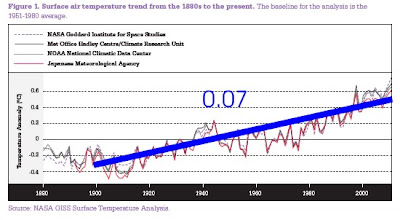 Looking at the longer term the claim is demonstrably false-just take a look at the temperature record revealed by Greenland and Antarctic ice cores. Here's Greenland's temperature for the past 20,000 years courtesy of NOAA:

There appears to be no end to the confirmation bias, misinformation and alarm!
Posted by Marc Hendrickx at 12:05 AM