Small trip on the tightrope of history 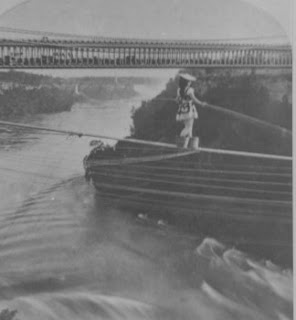 
A 23-year-old Italian woman, Maria Spelterina was the only woman to cross the Niagara gorge on a tightrope. In 1876, she walked backwards, put a paper bag over her head, and wore peach baskets on her feet to inject some drama into her crossings - note the lack of a safety harness source.

ABC borrow a report from AFP/Reuters about Nik Wallenda's recent tightrope walk across Niagara Falls (with a safety harness) that includes the following statement:

"Since the Great Blondin took his high-wire walk, a ban has been in place on similar stunts over the famed falls. Wallenda waged a two-year crusade to convince U.S. and Canadian officials to let him try the feat."

The Great Blondin, (Charles Blondin or  Jean-François Gravelet) crossed the Niagara River on a tight rope below the falls in June 1859 (see a contemporary, report in the Sydney Morning Herald HERE). Contrary to ABC's report, there were a number of other tightrope walks over the Niagara Gorge since Blondin's and the "ban*" has in fact been in place, not since Blondin's walk in 1859 but according the Niagara Parks Commission since July 1896 when James Hardy, crossed the gorge on a wire.

ABC's neglect in picking up and re-producing errors in the AFP/Reuters piece compounded when this February 2012 report with the photo above is taken into account: Maria Spelterini walks a tightrope over the Niagara Gorge. The date quite clear in that caption. But then we know ABC News has a disregard for historical accuracy.