ABC News staff numbers have steadily increased from 766 in 2003 to 942 in 2010. In any other sphere of business this would normally be associated with an increase in output. However, based on the number of stories posted to its News Archive,  ABC News continues to defy the normal laws of economics.
The chart below looks at the number of news stories in ABC's News Archive for Easter Sunday from 2003 to 2011, finding a dramatic slide in output. With 766 staff in 2003 ABC produced more than double the number of news items compared to 2011 (182, compared to 72)! Even with the addition of $24 million pumped into its continuous news centre since 2006, including over $11 million in this year alone ABC still can't match its 2003 productivity. In 2003 it took 4.2 ABC News staff to write one Easter Sunday story.  In 2011 it takes over 13, (based on projected staffing for this year of 960). 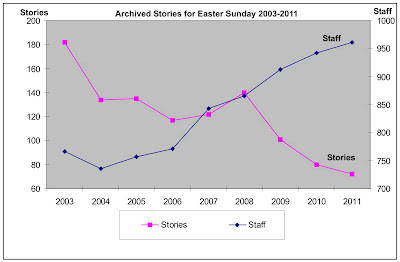 That's not the worst of it. When you consider the source, ABC News only contributed 35 stories this year, 2 of these jointly produced with the assistance of Reuters and AAP (see chart below). That's less than half. 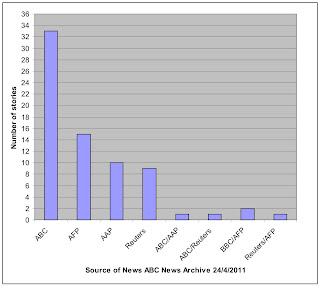 ABC doing much much less, with much much more.
The Raw numbers;
Posted by Marc Hendrickx at 7:07 AM