ABC's coverage of summer has taken on a new alarmist stance...
Health warnings as heatwave tipped to blast south-east Australia all week
Health warnings have been issued as a scorching heatwave starts to move from Western Australia into the country's south-east.
Authorities are warning temperatures will be in the 40s throughout the week and could cause sickness and even death among the very young and elderly.

I guess ABC's air-conditioned reporters might one day venture out of their artificial climate cells at Ultimo to see what all the fuss is about. Here's a pic from one of last year's heatwaves to give them an idea of what they might expect to see...oh the horror of it all! 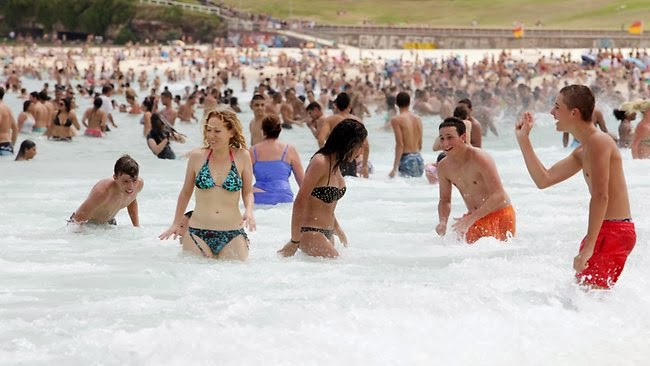 Update...meanwhile ABC's heatwave tracker still suggesting temps topping 50 degrees, no answer yet to our earlier inquiries.
Posted by Marc Hendrickx at 8:24 AM