ABC in the News Round Up 1

Introducing a new weekly (well occasional probably more like it) round up of critiques of ABC's news service from across the web (catchy graphics to follow). Perhaps one day it will look like THIS.

Part 1: Nepotism of the week.
Our Nepotism of the week award goes to Russell Skelton who is the inaugural head of the ABC Fact Check Unit and married to ABC Breakfast's Virginia Trioli. Good to see that the Groupthink is not being spread outside that inner city circle. More at Media Watch Dog (No.183) and Andrew Bolt's blog.

Part 2: Environmental beat ups for the week.
Oh the Irony! According to an opinion piece on ABC's environment blog, run at your expense by activist Sarah Phillips: IRONY DOESN'T GET ANY better than this. Environmentalists and farmers fighting the expansion of coal mining and coal seam gas across Australia are protecting the economy. Apparently People protesting CSG may help soften the landing when the carbon bubble bursts.  ABC currently costs us over $1,000,000,000.00 per annum and a large chunk of that is contributed indirectly by taxes from coal companies (who like many of us would probably prefer it go somewhere useful).  The irony does get better, for without those billions in coal taxes the government would have less funds to land softly in those gold plated Ultimo toilets.

Rising Seas
In other news ABC reports that Keen photographers urged to snap tidal changes. Green Cross Australia said people in coastal areas of South Australia had been urged to snap and submit photos of the latest king tides. Here's my submission taken at Port Pirie: 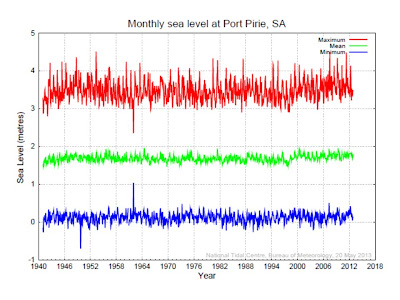 Part 3. Fact checker.
Tim Blair receives some interesting advice regarding the M word.
Gerard Henderson (Media Watch Dog No.183) finds some drammatic license has been applied to the facts in Paul Clarke’s documentary Whitlam: The Power and the Passion on Gough Whitlam which commenced on ABC 1 on Sunday.

Part 5: Sucker of the week. An occasional award for one of Aunties gullible reporters. This week awarded to: Simon Cullen for this piece: PM's office says Julia Gillard plans to serve full term if re-elected at federal election. I think I burst a blood vessel. 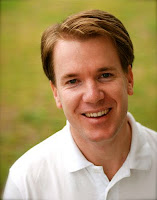 until next time...
Posted by Marc Hendrickx at 4:13 PM

Email ThisBlogThis!Share to TwitterShare to FacebookShare to Pinterest
Labels: abc round up