Perhaps using George Orwell's 1984 as an instruction manual ABC have apparently, sometime in the last 12 months, removed large numbers (10,000's)  of stories from its online news archive. Is this a means to hide the dramatic decline in its news productivity? Which stories were removed and why? What a radical re-writing of history! Or is it just a technical glitch?

ABC NEWS WATCH has been looking at the productivity of ABC news since 2010. As a measure of ABC's news productivity we have been using the number of stories posted to ABC's online news archive in June and its staff numbers from annual reports to help gauge its output. ABC senior staff have been reluctant to assist us with information about how the archive is managed (see correspondence in part 1). The figures show a dramatic decline in productivity since 2007. 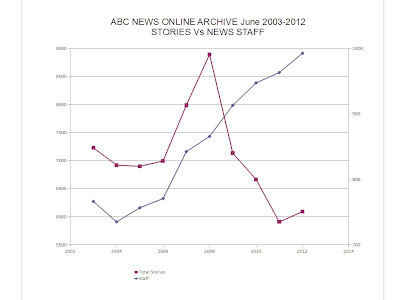 Looking over the number of stories posted for this year it became apparent that ABC have set a limit of stories that are posted to its archive in June this year. The limit appears to be set at 250 stories per day Monday to Friday. Weekend figures do not appear to have been adjusted.
To our surprise it appears this limit has been retrospectively applied to ABC's entire online archive since 2003. If true, this means that literally 1000s of stories have been culled (UPDATE make that 10,000s).
I have records of the number of stories posted for each day in the month of June from 2003 to present. I have not had the opportunity to go back through each year. For June 2003 the effect is dramatic with over 590 stories removed. For June 2004 it seems there are 171 less now compared to 2010 when we first reported on ABC's productivity. For the year of 2008 when we originally counted a record 8894 stories for June, ABC's archive now contains 6618 stories. It seems ABC have culled 2276 reports from history! And this just for the month of June, extended over the whole year it means 10,000s of stories have been evaporated.


Which stories? Why? How-what criteria were used for the cull? Or is this just a fat finger moment?
More on this as we find out what has happened.


We have archived some of the revised archive pages at webcite for posterity (eg HERE).
Posted by Marc Hendrickx at 4:07 PM