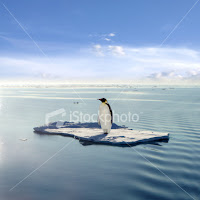 photo source
Earlier this year ABC's Karen Barlow took up a berth on the Aurora Australis that might have been occupied by a rational scientist. She breathlessly reported on penguin problems in Antarctica.

KAREN BARLOW: There are dire predictions for some penguin species. Of the 17 types of penguins, some, like the African and Galapagos Penguins, are classed as threatened or vulnerable - and according to a climate model study by the private Woods Hole Oceanographic Institute, Emperor Penguins could be virtually extinct by the end of the century. Generally, penguin populations on the Antarctic Peninsula below South America are decreasing, while Adelie numbers in East Antarctica, below Australia, are on the rise. Over-fishing of the penguin's main diet, krill, is having an effect, but scientists say climate change is also a factor.


Twice as Many Emperor Penguins as Thought in Antarctica, First-Ever Penguin Count from Space Shows

A new study using satellite mapping technology reveals there are twice as many emperor penguins in Antarctica than previously thought.
Link to study

Posted by Marc Hendrickx at 8:57 AM