Murray-Gate: Some questions for Media watch

Update: Media Watch response appears below...
Update 2: Professor Bunyip sinks the slipper: A Rum Lot At Media Watch
.
Media Watch appears to employ 11 staff members. The combined efforts of these 11 staff produce just 15 minutes of television a week. In 2011 Media Watch produced just 9.75 hours of television, less than 1 hour per staff member.  Do you consider this represents value for money to the Australian Tax payer? 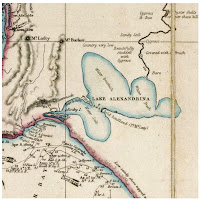 A map of Lake Alexandrina drawn by John Arrowsmith in 1838 based on reports of water quality from Charles Sturt. The map shows the lake contained salt water, brackish water and freshwater and this is consistent with it being part of an estuary. Source.

ABC's Media Watch program got itself into hot water this week after sending a series of questions to Murray River researcher Dr Jennifer Marohasy. According to Dr Marohasy, the questions were sent last Friday afternoon (9/3), with a plan for a national broadcast by Media Watch on the following Monday night (12/3).
Dr Marohasy outlines what happened:
MEDIA Watch contacted me on Friday with a barrage of questions concerning my work on the need to restore the Murray River’s estuary. Their line of questioning suggested that I was misleading the Australian public on the important issue of water reform in the Murray Darling. Indeed, the implication was that I am but a stooge for vested interests.

It appears Media Watch is contemplating asserting or implying that my professional judgement and integrity as a scientist has been influenced or corrupted by personal financial gain.  Accordingly, I have sought legal advice on the matter, and include this in my full response that can be downloaded HERE.
We are unsure of the motivation behind Media Watch's inquiries. Based on our understanding, none of its current staff have the scientific qualifications or necessary scientific experience to comment or judge the science behind the policy debate about the Murray River. Uncertain as to why Media Watch would focus on Dr Marohasy's work, we put the following questions to Media Watch Presenter Jonathan Holmes, and its executive producer Lin Buckfield.

Thank you for your email, it is one of many Media Watch has received in relation to questions the program sent to Dr Marohasy last week. As you will be aware, Media Watch has not, as yet,  run an item looking at the media coverage of the report “Plugging the Murray River’s Mouth” authored by Dr. Marohasy and commissioned by the Australian Environment Foundation.

Media Watch looks at how the media (all platforms) report and treat various issues. In order to do that we research many stories, telephone calls are made, emails are sent. Our hardworking team of 3 researchers cover a lot of ground in the course of their working days.

Ours is a controversial program, our investigations rarely please everyone but we are bound not only by our ethics as journalists but also by the ABC Editorial Policies to fair, honest and unbiased in our approach to our work. We are under no obligation to discuss correspondence or conversations with third parties done in the course of legitimate research.

Given that Media Watch has not yet put an item to air looking at the media coverage of the report “Plugging the Murray River’s Mouth”, may I suggest you get back to me with any questions you may have if and when the item airs?

Can you comment on what appears to be a very common Media Watch tactic of ambushing the subjects of its investigations with questions late on a Friday afternoon for reports that are due to be broadcast the following Monday. With this in mind I draw your attention to questions 13 and 14 in the list we provided.
13. Why did Media Watch provide Dr Marohasy with such short notice to respond to questions?
14. Does Media Watch consider the amount of time fair and reasonable given the number and nature of questioning?

Regards
Marc Hendrickx
Again this is for public posting at ABC NEWS WATCH
Posted by Marc Hendrickx at 11:30 AM