ABC's Karen Barlow takes up a berth on the Aurora Australis that might have been occupied by a rational scientist. She breathlessly reports on penguin problems in Antarctica.

KAREN BARLOW: There are dire predictions for some penguin species. Of the 17 types of penguins, some, like the African and Galapagos Penguins, are classed as threatened or vulnerable - and according to a climate model study by the private Woods Hole Oceanographic Institute, Emperor Penguins could be virtually extinct by the end of the century. Generally, penguin populations on the Antarctic Peninsula below South America are decreasing, while Adelie numbers in East Antarctica, below Australia, are on the rise. Over-fishing of the penguin's main diet, krill, is having an effect, but scientists say climate change is also a factor.

The Woods Holes Study was based on Computer modelling results for just one colony! The British Antarctic Survey recently found 10 new Emperor Penguin colonies using high resolution satellite data to spot guano patches. ( However, they noted that the satellite pictures could not pick up smaller colonies of fewer than 500 pairs of emperor penguins.) So there is likely to be more smaller colonies, they are likely to move around and change location. The basis of the WH study falls over at the first hurdle.

In regard to the Adelie Penguins we hear the following:
COLIN SOUTHWELL: There's fast ice growing out to 10 miles from the breeding colonies, so the penguins have to travel a lot further to get to their foraging ground than they would normally.

LOUISE EMMERSON: Well I didn't think that the population was going to be quite as big as it is, and we've been walking around with the intention of counting all the penguin breeding colonies, but it's not going to be possible in the limited time that we're going to be here, so we will do some helicopter surveys to finish off the counts.

KAREN BARLOW: So how can sea ice loss for one lot of penguins be good, and for the others bad? Dr Collin Southwell said a melt on the Antarctic Peninsula may have gone too far.

The long term trend for sea ice in Antarctica not provided in ABC report? It's UP!
Here's the statistics from Cryosphere Today – Arctic Climate Research at the University of Illinois: 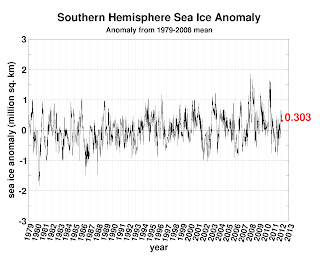 Only the ABC could take a good news story and and turn it into guano.
Posted by Marc Hendrickx at 8:56 AM