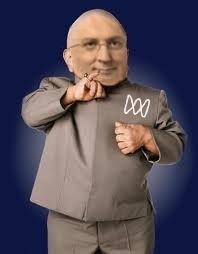 In a story headlined "Climate change downsizing fauna, flora" ABC Science reported on the results of a new study published in Nature Climate Change (Shrinking body size as an ecological response to climate change)
that suggested (according to the ABC) that "Climate change is reducing the size of many animal and plant species". The remainder of the story reads like a press release, with no critical input from ABC's groupthinkers.


The Australian covered the same story with a report from AP under the headline "Warming blamed for shrinking animals" that included this helpful caveat missing from ABC's typically one sided report:
But Yoram Yom-Tov, a zoologist at Tel Aviv University whose studies Dr Sheridan used in her research, said many species were shrinking, and global warming was not the sole reason.
"Changes in body size are a normal phenomenon," he said.
"Besides, most species will adapt to climate change."

But Yoram Yom-Tov, a zoologist at Tel Aviv University whose studies Sheridan used in her research, said many species are shrinking, and you can't blame global warming exclusively.
"Changes in body size are a normal phenomenon," Yom-Tov wrote in an email. "When conditions are favourable, they increase in size or reproduce at higher rates, and when conditions are deteriorating, they do the opposite. I think that most species will adapt to climate change and survive. No need for alarm."
And Stanford biologist Terry Root, an expert in climate change, said the study's conclusions "seem kind of far-fetched".

ABC's uncritical report states "Fossil records, they found, were unambiguous: past periods of rising temperatures had led both marine and land organisms to become progressively smaller." (ed I guess that would account for the size of the Dinosaurs).
Oddly just last week ABC were suggesting that cooling, not warming was responsible for shrinking things: from "Climate change 'shrank people and economy'"
"The Little Ice Age shrank people and the economy, leading to a general crisis in the 17th Century, say researchers."

ABC News: shrinking the quality of science reporting (at least they're consistent!).
Posted by Marc Hendrickx at 5:39 PM