PM - fails to hit the mark 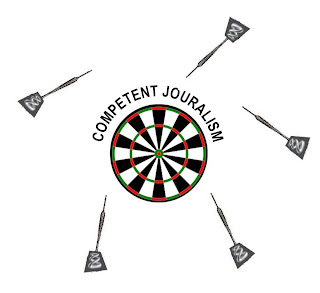 If ABC's nightly radio current affairs show PM threw darts the safest place to stand would be in front of the dart board.
Yesterday's alarmist story on payouts by the insurance industry a case in point. PM play the violin strings for the insurance industry having to payout on claims after this years bad weather. However a look at insurance profits over the last three years shows PM misses the bigger picture.
Roger Pielke Jnr's piece titled Tall Tales in the New York Times  finds the following profit reports from giant re-insurer Munich-Re:
2008: consolidated profit amounted to €1.5bn.
2009: a profit of over €2.5bn
2010: a consolidated result of €2.43bn
ABC NEWS: look it up in the thesaurus under gullible.

By the way the Pielke's Jnr and Snr are among the voices missing from the ABC. Here's a chance for PM to make amends and hit the dart board for a change.
Posted by Marc Hendrickx at 9:27 AM