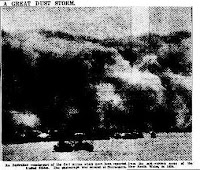 A Great Dust Storm
In late September ABC reported that an Australian dust storm could be weeks away.  Let's re-visit the forecast made in the original article:
"Professor De Deckker says he expects another major storm will develop after the flooded inland of Australia dries during spring.
"You had major floods in Central Australia and I think in the near future, when the material that covers the landscape - especially the lake floors and river banks - when that dries up, the wind will pick it up and lift some of the material to our eastern seashores," he said.

"So it is likely to be this spring, but more likely in early autumn."
It's now Summer and there has yet to be a large dust storm covered by ABC news, seems there was little skill in this forecast. Will ABC report on its failure?


We'll re-examine the forecast next Autumn.
Posted by Marc Hendrickx at 12:05 AM

Email ThisBlogThis!Share to TwitterShare to FacebookShare to Pinterest
Labels: dust